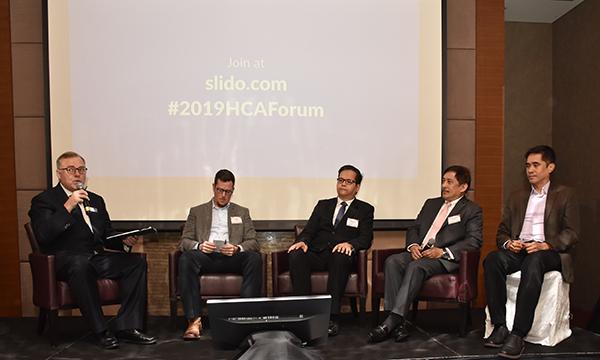 Hospitals in the Philippines are looking to streamline their organisational structures and improve employee engagement in anticipation of the government’s bid to roll out its Universal Health Care (UHC) into law, which will see all Filipinos enrolled in the National Health Insurance Program of the Philippine Health Insurance Corporation (PhilHealth).

At the Manila Leg of the 2019 Healthcare Asia Forum, around 70 attendees from 33 hospitals, which include practitioners from Singapore and Malaysia, exchanged ideas on how hospitals could best enhance their services and staff retention practices whilst adapting to changes brought about by the anticipated UHC.

According to Dr. Mar Wynn Bello, OIC-director IV for the Bureau of International Health Cooperation (BIHC) at the Department of Health (DOH), the government needs to seek the help of the private sector to reduce Filipino patients’ out-of-pocket expenditures which now account for 54.2% of their funding sources.

“Out-of-pocket expenses, or what patients themselves are spending, are not decreasing. If you compare it with Vietnam and Indonesia, the Philippines is witnessing a trend of increasing out-of-pocket funding, despite the fact that we are providing more budget now for public health,” he said, noting that the budget of the DOH is at $3.27b-$3.47b (PHP170b-180b) which is roughly 18 times higher than the budget in 1991.

Dr. Bello added that under the UHC, coverage of social health insurance will expand into the provision or expenditure in terms of healthcare, which is where the private sector will come into play.

Chris Hardesty, director of life sciences at KPMG, expressed skepticism over the government’s capability to achieve its goals by 2030 on its own. “If you think about how a government can expand access and coverage to its people, you can increase taxes, or you could reduce the layer of covers that you’re promising to people. Neither one of those is a really good, viable option.”

“We need to figure out a way to not only help the population’s health and help save costs but to also have sustainable business models,” he added.

KPMG’s statistics showed that for every additional year of life expectancy that is added to a country’s population, there will be a consequent 4% increase in GDP. The Philippines’ life expectancy stood at 72.5, DOH noted.

Whilst the UHC may see the consolidation of hospitals and health facilities at the provincial level, measures are being taken to ensure that healthcare practitioners stay - both at their respective hospitals and in the country.

A study conducted in 2002 found personnel shortages ranked as the top issue for hospitals, and whilst it no longer places as the number one concern after being overtaken by financial challenges, it still remains amongst the top problems hospital management has to deal with, according to Dr. Marcellus Ramirez, assistant medical director at the University of Santo Thomas (UST).

He added that when looking at the salary scale of nurses in the private sector, it is almost comparable with government hospitals. “But we’re not trying to improve it because millennials are not very particular about the non-monetary benefits. They don’t care about health insurance, they don’t care about the medical benefits. So what we do is convert the non-monetary benefits to monetise them.”

Maria Martina Geraldine Dimalibot, senior vice president and chief medical officer at St. Luke’s Medical Center, highlighted that 17.5% of new nurses leave their first job in their first year, whilst 14% leave in their second year due to burnout and dissatisfaction. Dimalibot shared that they formed a ‘Pathway to Excellence’ (PTE) programme and various committees to encourage nurse participation in improving outcomes, as well as monitoring of the hospital’s systems to address performance gaps.

Dr. Benjamin Campomanes, senior vice president and chief medical officer at St. Luke’s Medical Centre, also shared how they introduced a one-health care system organisational structure to streamline practices in their two hospitals at Bonifacio Global City and Quezon City, which marks a shift from the hospital’s pre-one-health care system processes which he admitted were ‘much more chaotic’ as forms from one hospital were not accepted in the other.

Rafael Solis, executive vice president and head of hospital operations at St. Luke’s Medical Center, cited a 2017 study that showed that a 5% increase in employee engagement could lead to a 3% boost in earnings, as well as a drop in the number of employees looking to leave, which stood at 51%.

“Staff turnover is the biggest challenge for hospitals, although we have seen a decrease in turnover. That said, we need to capitalise on this high global engagement. This is the best time to transform and reform organisations, as employees are more likely to back them up,” he noted.

Joseph Mocanu, managing partner for Verge HealthTech Fund and advisor for Lifetrack Medical Systems Inc., also stressed the need for a national health record with a standard and open infrastructure, highlighting that until one is set in place, Philippine hospitals and medical practitioners are running blind.

“You don’t need someone who has studied for 25 years taking your pulse. That is inefficient, and that’s wasteful. They should be using their 25 years of training to make decisions and nothing else. No writing, no administration, no running around. Just using their brain for what it’s trying to do,” he said.

The 2019 Healthcare Asia Forum was held on May 3 at Makati Shangri-La. For any event inquiries, please email andrea@charltonmediamail.com