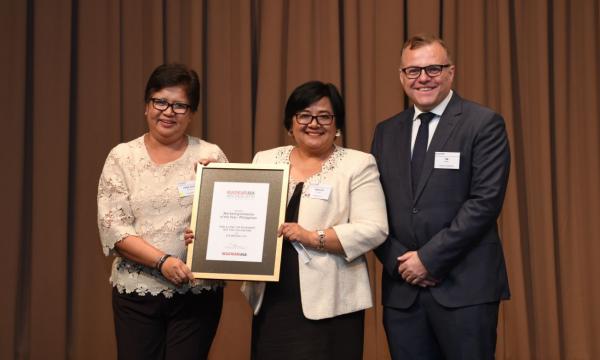 The hospital's pulmonary test lets patients sing their hearts out.

The Medical City (TMC) has 50 years of experience in hospital operation and administration of its world-class healthcare facilities that serves some 50,000 inpatients and 500,000 outpatients a year. TMC has a growing healthcare network in different parts of the Philippines, proof of the hospital’s commitment to make high quality healthcare accessible to its growing customer base. It has also taken its brand into the global arena through the ownership and operation of Guam Regional Medical City or GRMC, the first and only private hospital in Guam, and the establishment of ambulatory clinics in Gulf Cooperation Council countries.

TMC wanted people to get their lungs checked before it’s too late by introducing the first ever pulmonary test tool that you can sing. Lung disease is one of the top silent killers of Filipinos and people don’t normally go to the hospital for lung-check ups. By the time they do, their lungs might already be in bad shape. In fact, about 3.2 million people succumbed in 2015 to chronic obstructive pulmonary disease (COPD), caused mainly by smoking and pollution, while 400,000 people died from asthma. Both diseases can be treated affordably, but many sufferers are often left undiagnosed, misdiagnosed or under-treated. The Medical City won the Healthcare Asia Awards 2018 for Marketing Initiative of the Year for this sing-along pulmonary test.

TMC's SING-A-LUNG Program was introduced as a pulmonary screening tool to help encourage people to undergo a Pulmonary Function Test (PFT), a non-invasive test to measure how well the lungs are working. The program was done through a favorite Filipino pastime, the karaoke. The mechanics of the hospital’s pulmonary test tool was combined with the expertise of musicians to create a self-test song. Elements that test breath control and lung volume capacity like extended notes and short and forceful notes or staccato were integrated to the song. The song took the form of a love song with lyrics that allude to the sensation of having a lung problem. If a person experiences difficulty or shortness of breath while singing the song, it may mean that he needs a comprehensive PFT from the hospital.

When the song was recorded, it was tested at TMC. A karaoke video for the song was also made and launched at TMC’s hospital lobby. The video begins with a quick explanation of what the song tests and ends with a call to action to schedule an appointment with the hospital. It was also posted on social media, virtually making every screen a karaoke channel that helps people test their lung health. Currently, the song is being rolled out in KTV bars in Manila. Since Sing-A-Lung was launched, pulmonary function tests in the hospital increased to 135 in September 2017 from 59 tests the previous year.The karaoke video has also become the most viewed video content on The Medical City Facebook page.

The Healthcare Asia Awards 2018 was held on 23 May 2018 at the Conrad Centennial Singapore.

Check out the event photos during the awards night here.

If you would like to join the 2019 awards and be awarded as one of the most outstanding healthcare companies in the region, please email Marianne at marianneavilla@charltonmediamail.com.