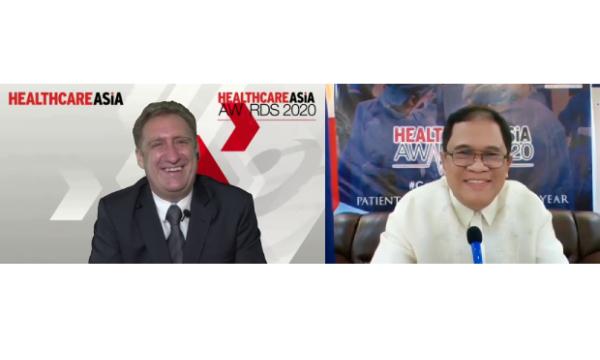 The hospital is blazing trails by reducing morbidity and mortality for patients with STEMI.

Driven by the goal to supply timely thrombolysis and primary Percutaneous Coronary Intervention (PCI) to underserved patients affected by ST-Elevation Myocardial Infarction (STEMI), the hospital launched CODE HB (Heart of Batangas) Program in February 2015. This has earned them the Patient Care Initiative of the Year Award for Philippines during the recently concluded Healthcare Asia Awards 2020.

The program was born from the dissatisfaction of Filipino interventional cardiologists Dr. Ariel Miranda, Dr. Joselito Ramos, Dr. Charlies Esteban, and Dr. Romula Rosita who were concerned with STEMI metrics in Batangas. This prompted him to create the country’s first CODE HB STEMI network program with the full support of Dr Robert Magsino, CEO and President of Mary Mediatrix Medical Center and Dr. Charles Tabora, head of the Mediatrix Heart Institute.

Using the hub and spoke model, the initiative provides PCI and 24/7 cardiac catheterization laboratory services to 70 percent of STEMI patients in Lipa, Batangas. Mary Mediatrix Medical Center serves as the hub while neighboring non-PCI hospitals are the spokes.

It has seen its share of struggles, particularly during its early phase where it faced low attendance during launch, patients’ minimal STEMI knowledge, community physicians’ nominal knowledge on reperfusion strategies, the lack of streptokinase in community hospitals and patients’ refusal to receive reperfusion due to financial constraints.

Within the first two years of the Cardiac Catheterization Laboratory’s operations, majority of the patients underwent Percutaneous Transluminal Coronary Angioplasty (PTCA) because of STEMI. The hospital also saw a prolonged median symptom-onset to ER presentation at six hours. The median door-to-needle and door-to-balloon times were also prolonged at 60 minutes and 200 minutes, respectively, thereby resulting in a high mortality rate of 13%.

To combat these challenges, the hospital conducted on-site lectures to educate patients in looking into reperfusion treatments. Physicians were also permitted to show improved patient outcomes with the CODE HB STEMI network program.

After four years of exertion in establishing primary angioplasty in the Philippines, the CODE HB program yielded favorable results. Median symptom onset to ER presentation has been reduced from six to four and a half hours, and the median door-to-needle time and door-to-balloon times have been decreased to 52.5 minutes and 90 minutes, respectively. Most importantly, mortality rate has improved from 13 percent to 8 percent.

The Cardiac Catheterization Laboratory has also achieved greater reperfusion rate than the National Registry and has provided a community-centered hub and spoke model for the treatment of Acute STEMI in Batangas.

CODE HB Program has also entered the international scene, after the team presented the initiative to the APAC Summit in Singapore last 2016.

To further provide quality healthcare services to patients in Southern Luzon, Mary Mediatrix Medical Center’s plans to work towards setting up a dedicated Emergency Medical Services and 911 hotline in Lipa. To achieve this goal, the hospital is coordinating with the Lipa City local government in addressing the region’s health-related problems.

Watch the interview below to know more about their winning strategy:

The Healthcare Asia Awards 2020 was originally scheduled on 14 April. Recognition of winners was held via video conferences throughout 14-17 April and 14 May.

If you would like to join the 2021 awards and be awarded as one of the most outstanding healthcare companies in the region, please email Julie Anne Nuñez at julie@charltonmediamail.com